Archaellys has fallen in love with Assassin’s Creed IV: Black Flag and I have to admit, it is a gorgeous game!  This, of course, influenced our last movie night and we had a pirate theme.  Treasure Island (1950) and Pirates of the Caribbean: The Curse of the Black Pearl.  Naturally I wanted our noms to be piratey too, but I wasn’t sure that I could get my hands on enough oranges to fight off the scurvy.

A co-worker suggested making a black bean coconut soup, but she warned that it was only a good base.  I didn’t really have it in me to think too creatively with something I haven’t tried yet, and then she suggested jerk chicken.  DUH!  Of course!  After a quick Google search, I learned that there are a lot of various takes on jerk chicken out there.  I came across a recipe for a jerk chicken stew and modified it with some additional spices and suggestions from a few other recipes.  Then I figured out that jerk chicken is usually served with coconut rice to temper the heat.  What followed was a crazy mishmash of spicy chicken goodness that I’ve been happily eating pretty much every night since. 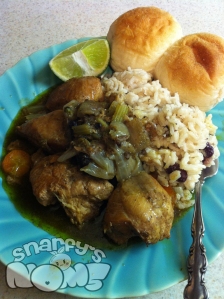 Pull out your food processor and throw in the peppers, spices, green onions, and ginger root.  Get it working and stream in enough oil to make a paste.  Set this mixture aside.  Separate your chicken legs so you have drumsticks and thighs.  You could also just use thighs or whatever cut of chicken you like.

Get a big pot out and put some oil in there.  Light a fire under your pot and once the oil is hot, add the chicken in 2-3 batches.  Get that skin crisp and let the meat semi-cook.  Rough chop your veggies – I like to leave them big so things still have a bite after simmering for an hour on the stove.  Saute the veggies on their own in that big pot for a couple minutes and then add in all the chicken.  Add the jerk paste and mix.  Then add the vinegar, broth, and lime juice.  Make sure the scrape the bottom of the pot to lift any of that flavor that might be stuck to the bottom.  Throw a lid on the pot, set the heat to the lowest it will go, and simmer the pot for an hour.  Thicken the sauce with a corn starch slurry if you need to (I did because I like the sauce a little thicker) and simmer a little longer if you add the slurry.  Serve with coconut rice (recipe following) and a lime wedge.

Note: If you can find them, use black-eyed peas instead.  I couldn’t locate them in time so I threw in some red beans instead.

Heat that oil in a heavy saucepan.  Get those onions and garlic in that heated oil and saute under the onions are tender.  Add in the rice and make sure the grains get slick with oil and a little toasted.  Add in the beans, then the coconut milk and broth.  Bring to a boil, throw on the lid, and remove from heat for 15 minutes.  Stir the rice and allow to sit with the lid on until all the liquid is absorbed.  Add in some salt if you like and stir it in.